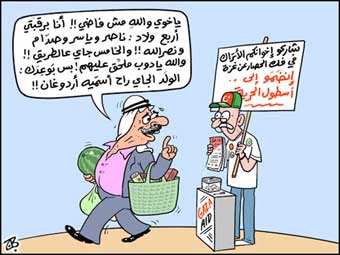 This Cartoon Says it All:

The man with the Turkish flag on his cap is soliciting volunteers to break the Gaza siege. He is carrying a sign that reads, "join your Turkish brothers in breaking the Gaza siege; join the Freedom Flotilla!"

The man with big belly on the left responds:

"I am too busy and besides, I have 4 boys to care for: Nasser (named after the former Egyptian president), Yasser (after Yasser Arafat), Saddam and Nasrallah.

The fifth boy is on the way; I can hardly keep up with them. However, I promise you that I will name the new boy ERDOGAN!"
Posted by Tony at 6:43 PM