The premier who thought Hitler was a 'Joan of Arc' 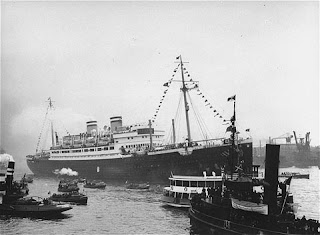 "....Little surprise, then, that when a passenger ship called St Louis – packed with 700 Jews fleeing Europe, their faces alight with hope before the cameras as it approached Canada on 17 June 1939 – Mackenzie King's government refused it entry. Canadians protested. So did journalists. And if you look today at photographs of the ship, you'll see children, husbands and wives with faces of smiling relief. They were safe. But they were not. They were sent back to the gas chambers.

There's no doubt why the National Post carried Mulroney's terrible story last week: to smother our condemnation of Israel's latest brutality. As usual, we who speak out against the ruthlessness of Israel's army – as, of course, we do against the Arabs – are anti-Semites. Remember the Holocaust. Remember Our Guilt. But it was Rick Salutin of the Toronto Globe and Mail who got it right this week. "It seems to me," he wrote, "that Israel's leaders have grown mindlessly, habitually dependent on asserting their own victimisation. This was often effective, based largely on sympathies rooted in revulsion of the Holocaust and the story of Western anti-Semitism. But this has gradually changed, due partly to the arrival of generations who, as it were, knew not Hitler, and aren't inclined to feel even indirectly guilty for him. The shift became evident during the 2008 Gaza invasion ... Yet Israel's leaders still automatically assume the victim position ... Societies that lose their internal dissent and self-criticism have a sad and scary record, especially when combined with a sense of victimisation."

I was on a Turkish television show this week and two of the other speakers were Jews from Israel. But both were outraged at the actions of their own government. And I wonder, as I write this, whether the doomed Jews on the St Louis might not agree with us, rather than the cruel regime that has laid claim to their souls. As for Mackenzie King... Well, he knew how to turn a boat away."
Posted by Tony at 7:50 AM