Moral Failure of American Liberals: A Defence of Helen Thomas 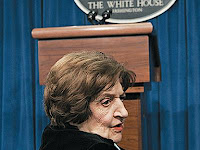 "The ostracism of Helen Thomas, the doyenne of the White House press corps, over her comment that Jews should 'get the hell out of Palestine' and 'go home' to Poland, Germany, America and elsewhere is revealing in several ways. In spite of an apology, the 89-year-old has been summarily retired by the Hearst newspaper group, dropped by her agent, spurned by the White House, and denounced by long-time friends and colleagues.

Ms Thomas earnt a reputation as a combative journalist, at least by American standards, with a succession of administrations over their Middle East policies, culminating in Bush officials boycotting her for her relentless criticisms of the occupations of Iraq and Afghanistan. But the reaction to her latest remarks suggest that, if there is one topic in American public life on which the boundaries of what can and cannot be said are still tightly policed, it is Israel.....

It is with this context in mind that we can draw a more fitting analogy. We should ask instead: How harshly should Ms Thomas be judged were she a black professional who, seeing yet another injustice like the video of Rodney King being beaten to within an inch of his life by white policemen, had said white Americans ought to “go home to Europe”?

This analogy accords more closely with the reality of power relations in the US between Arabs and Jews. Ms Thomas is not a representative of the oppressor white man disrespecting the oppressed black man, as Mr Davis suggests; she is the oppressed black man hitting back at the oppressor. Her comments shocked not least because they denied an image that continues to dominate in modern America of the vulnerable Jew, a myth that persists even as Jews have become the most successful minority in the country...."
Posted by Tony at 6:23 AM