Israel's Cult of Victimhood: 'Barefoot' Soldiers on the High Seas 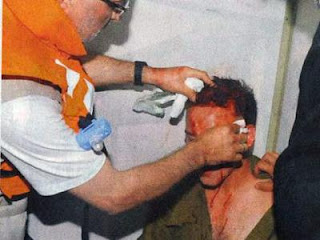 "Why are Israelis so indignant at the international outrage that has greeted their country's lethal attack last week on a flotilla of civilian ships taking aid to Gaza?

Israelis have not responded in any of the ways we might have expected. There has been little soul-searching about the morality, let alone legality, of soldiers invading ships in international waters and killing civilians. In the main, Israelis have not been interested in asking tough questions of their political and military leaders about why the incident was handled so badly. And only a few commentators appear concerned about the diplomatic fall-out.

Instead, Israelis are engaged in a Kafkaesque conversation in which the military attack on the civilian ships is characterised as a legitimate “act of self-defence”, as Prime Minister Benjamin Netanyahu called it, and the killing of nine aid activists is transformed into an attempted “lynching of our soldiers” by terrorists....

The lessons imbibed from this episode -- like the lessons Israelis learnt from the Goldstone report last year into the war crimes committed during Israel’s attack on Gaza, or the international criticisms of the massive firepower unleashed on Lebanon before that -- are the same: that the world hates us, and that we are alone.

If the confrontation with the activists on the flotilla has proved to Israelis that the unarmed passengers were really terrorists, the world’s refusal to stay quiet has confirmed what Israelis already knew: that, deep down, non-Jews are all really anti-Semites.

Meanwhile, the lesson the rest of us need to draw from the deadly commando raid is that the world can no longer afford to indulge these delusions. "
Posted by Tony at 7:03 AM