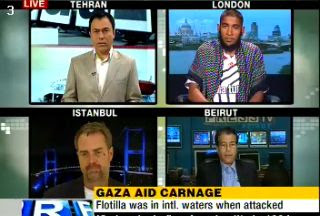 "The testimonials of activists onboard the Gaza aid Freedom Flotilla, which was attacked by Israel, have revealed disturbing evidence about the extent of brutality used by the Israeli forces.
The ship became pool of blood,one passenger recalled. They came into the part where the women were, soldiers dressed in black and with gigantic weapons as if they were in a war.

The findings from the autopsies performed on the nine Turkish men killed onboard Mavi Marmara were telling: They were shot a total of 30 times, with five killed by gunshot wounds to the head....

The following is the transcript of Press TV's interview with three of the flotilla attack survivors. They are Managing Director of Aloha Palestine CIC Ken O'Keefe in Istanbul, Human Rights Activist Tauqir Sharif in London and Media Officer of the National Committee for Lifting the Gaza Siege Nabil Hallak in Lebanon....."
Posted by Tony at 3:52 AM