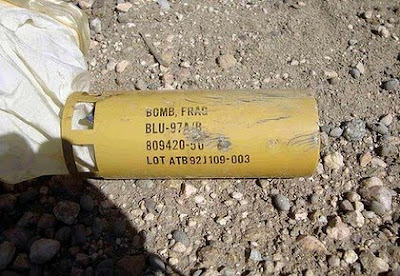 "Amnesty International has released images of a US-manufactured cruise missile that carried cluster munitions, apparently taken following an attack on an alleged al-Qa’ida training camp in Yemen that killed 41 local residents, including 14 women and 21 children.

The 17 December 2009 attack on the community of al-Ma'jalah in the Abyan area in the south of Yemen killed 55 people including 14 alleged members of al-Qa’ida.

“A military strike of this kind against alleged militants without an attempt to detain them is at the very least unlawful. The fact that so many of the victims were actually women and children indicates that the attack was in fact grossly irresponsible, particularly given the likely use of cluster munitions,” said Philip Luther, Deputy Director of Amnesty International's Middle East and North Africa Programme....."
Posted by Tony at 6:32 AM