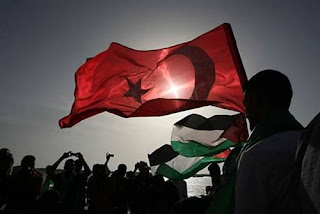 "‘We’re the only ones who believe them,” a US official was quoted as complaining last week in response to Israel’s account of its attack on the Gaza aid flotilla.

The bloodshed on the high seas and the resulting diplomatic fallout is a reminder of just how far US influence has fallen in the region, and the grim prospects for the US president Barack Obama reversing that trend as long as the US continues to accord Israel special status...."
Posted by Tony at 3:13 PM