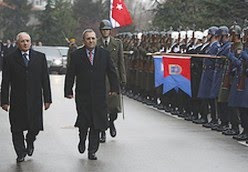 By ERIC MARGOLIS
The Toronto Sun

(Left: Ehud Barak in a recent visit to Turkey)

"....Turkey’s brass have overthrown four governments since the Second World War and once ousted Erdogan from office. They particularly hate his AK party, which espouses principles of Islamic welfare, cuts in defence spending, friendship with Greece and joining the EU.

Turkey’s generals, and their allies in the security establishment, courts and academia, are militant secularist Kemalists who detest religious and political Islam, scorn Arabs, and are ideologically close to Israel’s right-wing military establishment. Israel has sold Turkey billions in arms deals, producing huge commissions for both sides.

Israel’s crack air force trains in Turkey and had been planning to use Turkish airspace to attack Iran. The two nations’ intelligence agencies co-operate closely.

After a series of intrigues collectively know as “Ergenekon,” the government has broken up cabals of far-right Turkish officers and civilian plotters, averting another military coup. Turkey’s bullying military has been largely pushed out of politics.

Now, Netanyahu’s bungling has shot Israel in both feet. To paraphrase Talleyrand, worse than crime, an error.

The world is demanding Israel end the brutal siege of hungry Gaza. More blockade-busting ships are at sea.

Israeli-Turkish relations may never recover. Crowds across Turkey wave banners, “We Are All Palestinians.” Erdogan has emerged as the Muslim world’s most important leader.

When Israeli’s emotions cool down, they will see how foolhardy Bibi Netanyahu, Israel’s George Bush, has been."
Posted by Tony at 11:47 AM