Our Enemies, the Israelis

When will we wake up to the threat?

"....Well, actually, there is a lot wrong with that, but, in any case, what’s the answer to this question? Again and again Israel has outraged the world, and even many of its most dedicated supporters, by its actions: multiple invasions of Lebanon, “incursions” into Gaza and the West Bank, the ever-expanding settlements, the vicious racism and tribalism that characterizes the present ultra-rightist government of Benjamin Netanyahu, which includes the openly racist and fascist party of the thuggish Avigdor Lieberman – the list of Israel’s sins is a long one, and that’s going back but a few years.

Even when the Israelis blew up a US Navy ship, the USS Liberty, a military reconnaissance vessel that was monitoring Israeli troops movements prior to the Six Day War, Washington went along – in public – with Tel Aviv’s fairy tale claiming it was an “accident.” This disgrace is repeated, today, as the beaten and battered Americans who lived to tell the tale of what happened aboard the flotilla return to bear witness to Israeli brutality. An American citizen is killed, and Washington looks the other way. 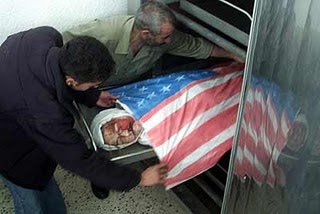 The ghost of Rachel Corrie is not surprised. Nor am I. Because the Israelis, after all, are our enemies........"
Posted by Tony at 6:29 AM