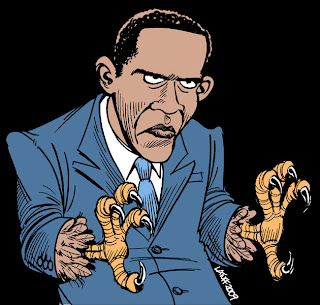 "Whether wittingly or witlessly, President Barack Obama is pursuing a neocon-charted path on Iran that parallels the one that George W. Bush took to war with Iraq – ratcheting up sanctions against the “enemy,” refusing to tolerate more peaceful options, and swaggering along with the propagandistic tough-guy-ism of the major U.S. news media.....

Having let his administration rebuff the Iran-Turkey-Brazil deal in favor of more UN sanctions and soon even tougher U.S. sanctions, Obama has let his foreign policy either drift – or be piloted – toward a worsening crisis."
Posted by Tony at 6:34 AM