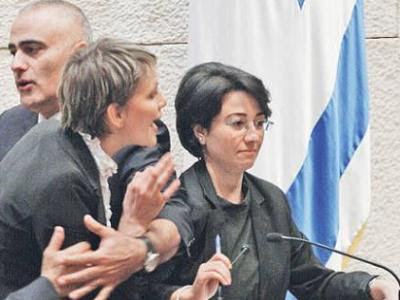 "An Israeli parliamentary committee recommended stripping an Arab MP of her privileges yesterday in a move to prepare the ground for putting her on trial for participating last week in the Gaza-bound aid flotilla attacked by Israeli commandos.

Haneen Zoubi, who has become a national hate figure since challenging Israel’s account of the confrontation, said yesterday she was facing “a witch-hunt”.

The interior minister, Eli Yishai, has submitted a request for her citizenship to be revoked, and a bill -- labelled the “Zoubi Law” -- is being considered that would allow a serving MP to be expelled for “inciting” against the state.

Ms Zoubi has been provided with a bodyguard after receiving a spate of death threats. A popular Facebook page in Hebrew is calling for her execution and an online petition for her expulsion from the parliament has attracted tens of thousands of supporters......."
Posted by Tony at 6:42 AM