Israel preparing for prolonged ME war 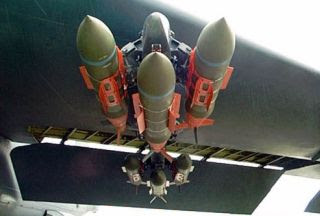 "Israel seems to be preparing for a prolonged war in the Middle East, demanding the United States for more military equipment and a boost of US-held arsenals in Israel.

The requests were brought up during recent visits to Washington by high-ranking Israeli defense officials, and in conversations with senior administration and Congress officials, Haaretz revealed in an article published on its website on Tuesday.

Among the requested weapons are US bombs and precision guidance kits, such as Joint Direct Attack Munition (JDAM) that add GPS/INS guidance to bombs.

The JDAM kits have been increasingly used by the Israeli air force in recent offensives, including in the 2006 war against Lebanon and the 2008 Gaza war.

The priority list is said to indicate that Israel is preparing for the prospects of a long war, which would necessitate an extensive use of the air force to attack a large number of targets, along with ensuring enough spare parts and supplies.

Israel is also seeking to increase the amount of gear held by the American army in their emergency stores in Israel by 50 percent — that is from $800 million to $1.2 billion...."
Posted by Tony at 4:04 AM