'We'll be Back - With Bigger Flotillas' 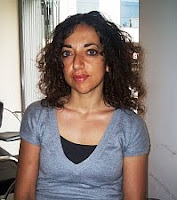 Mel Frykberg interviews HUWAIDA ARRAF, a leader of the Free Gaza flotilla
(Don't miss it!)
"RAMALLAH, Jun 8, 2010 (IPS) - In an exclusive interview with IPS Huwaida Arraf, the chairwoman of the Free Gaza (FG) movement, which tried to break Israel’s crippling blockade on Gaza, explains what happened on the night of May 31 when Israeli commandos raided the FG humanitarian flotilla, shooting nine people dead and injuring dozens more.

Controversy surrounds the events following the deadly commando raid with survivors from among the 700 activists on board the flotilla giving a very different version of events from that of the Israeli government.

Q: Critics have accused FG of deliberately provoking a confrontation with the Israelis and argued that the attempt to break the siege was political and not just a humanitarian relief operation.

A: They are correct to say that FG’s aim was more than just bringing humanitarian relief. We are deeply disturbed by Israel’s deliberate and calculated creation of a humanitarian crisis in the coastal territory and we intended to draw international attention to this.

We are not interested in simply perpetuating the siege and the humanitarian crisis by bringing in aid alone. Gazans are not interested in being aid dependent either. Eighty percent of Gaza’s population is dependent on food aid. This is not the result of a natural disaster but a deliberate and cruel Israeli policy. We are concerned that the human rights of Gazans be respected and they are allowed to live a normal life as human beings.

Q: Did the activists provoke the Israeli commandos into using deadly force?