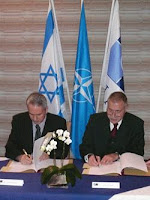 "BRUSSELS, Jun 9, 2010 (IPS) - Strategists with NATO are eager to maintain the strong bonds they have developed with Israel in recent times, even though its forces last week attacked a ship flagged in Turkey, a steadfast member of the alliance.

Ever since its inception in 1949, NATO (North Atlantic Treaty Organisation) has legally been dedicated to the principle of mutual defence. According to this principle, an attack on any one country in the alliance is considered an attack on all of its member states.

Analysts readily concur that Israel posed a fundamental challenge to NATO by storming the Mavi Marmara, a Turkish vessel participating in the Gaza Freedom Flotilla, killing nine peace activists. But while Turkey's government responded swiftly to the assault by convening an emergency meeting in NATO's Brussels headquarters, realpolitik has prevented Ankara from demanding a robust response from its allies....

Despite identifying Iran's uranium enrichment efforts as a threat, NATO has been silent about Israel's own nuclear programme, with which it is widely believed to have developed up to 300 nuclear bombs. The programme has been developed in secret but a new book by the journalist Sasha Polakow- Suransky 'The Unspoken Alliance: Israel's Secret Relationship with South Africa' gives details of documents which appear to prove the existence of Israel's nuclear weapons...."
Posted by Tony at 6:35 AM