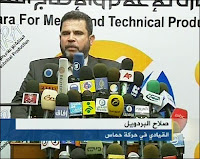 "Hamas has welcomed a proposal by the European Union (EU) to monitor Gaza crossings in a bid to help lift the Israeli-imposed siege on the Palestinian territory.

Hamas "welcomes this proposal in all its aspects," of EU or international presence at Rafah, Ma'an news agency quoted the Palestinian movement's senior official Salah al-Bardawil as saying on Sunday.

Bardawil, however, strongly rejected the idea of Israel policing in the south, stressing that "Israel should not obstruct any convoys or ships coming to the Gaza port."

The proposed plan reportedly includes the activation of the EU monitoring committee at Rafah and developing similar initiatives at at least three other crossings.

The force would also assist in sea patrols so that the Gaza port could open...."
Posted by Tony at 3:34 AM