Was the Obama Administration involved in the Planning of the Israeli Attack on the Gaza Freedom Flotilla?

"The Israeli Navy Commando had prior knowledge of who was on the Turkish ship including where passengers were residing in terms of cabin layout. According to Swedish author Henning Mankell, who was on board the Marmara , "the Israeli forces attacked sleeping civilians."

"We were witnesses to premeditated murders," said historian Mattias Gardell who was on the Mavi Marmara..... 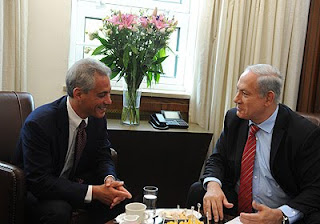 The Role of Rahm Emmanuel

Several high level US-Israel meetings were held in the months prior to the May 31st attacks.

Rahm Emmanuel, Obama's White House chief of Staff was in Tel Aviv a week prior to the attacks. Confirmed by press reports, he had meetings behind closed doors with Prime Minister Netanyahu (May 26) as well as a private visit with President Shimon Peres on May 27....."
Posted by Tony at 9:20 AM