Gaza's boys and girls come out to play 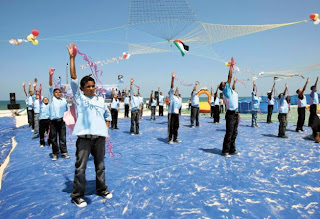 The UN summer games offer the blockaded territory's children a rare chance of fun. But a terrifying warning from hardliners has cast a shadow over this year's event

"London 2012 it isn't. But on Sunday a relay of 50 schoolchildren bearing an Olympic-style torch will start from Deir el Balah Elementary Boy's School in central Gaza on the 17km road journey along the Mediterranean coast to the UN compound in Gaza City. There, they will light a flame, less to commemorate the notorious white phosphorus bombardment which razed the main warehouse here during Israel's military offensive in January 2009, than to herald the start of something altogether more cheerful: the fourth annual summer games.

Throughout the summer a total of 250,000 children will be brought together every day – girls and boys in separate groups in deference to Gaza's traditionally conservative culture – for a fortnight by the UN Refugee agency UNRWA for something that John Ging, its Gaza Operations Director, points out is all-too rare in Gaza: "a moment of childhood and happiness"......

A few days after a gang of around 25 masked and armed men scorched and vandalised one of 35 camps being prepared for the games, John Ging, Operations Director of UNRWA here, was visited by three 15-year-old girls from Rimal Preparatory School. All three were appalled at the attack which wrought some $20,000 worth of damage and included delivery of an ominously menacing message for Mr Ging himself. The girls' appeal was simple: please don't cancel the games because of what happened.

Mr Ging was touched – and quick to reassure them. Having devised the games four years ago, he told the girls he was not about to abandon them now. As one of the girls, Amani Sansour, later explained in articulate English: "When we met Mr John he told us he will never stop the project. We are very happy that the summer games will not be stopped. It's a big chance for children to have fun and happiness in their lives, and their human rights. They can practise their hobbies and do things like swimming. This is especially good for girls who can't go to swim together without their parents, according to the traditional culture here. Life is very hard here for boys and girls but harder for girls."....."
Posted by Tony at 4:18 AM