Kidnapped by Israel, forsaken by Britain 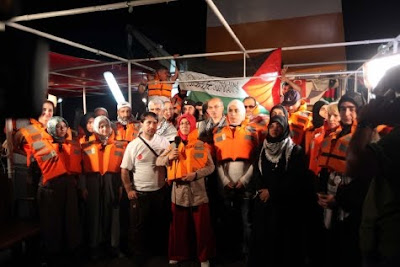 "....It was this time last week that I was on the top deck of the Mavi Marmara, and first spotted Israeli war ships in the distance, as they approached the humanitarian flotilla. Little did I know how deadly and bloody were the events that soon began to unfold.

What I will write in this entry is fact, every letter of it, none of it is opinion, none of it is analysis, and I will leave that to you, the reader....

Commandos on board the choppers joined the firing, using live ammunition, before any of the soldiers had descended onto the ship.

One Israeli soldier, armed with a large automatic gun and a side pistol, was overpowered by several passengers. They disarmed him. They did not use his weapons or fire them; instead they threw his weapons over board and into the sea.

I was the last person to leave the top deck.....

Several announcements were made on the loud speakers in Hebrew, Arabic and English - "This is a message to the Israeli army, we have surrendered. We are unarmed. We have critically injured people. Please come and take them. We will not attack."

There was no response.

One of the passengers, a member of the Israeli Parliament wrote a sign in Hebrew, reading the exact same thing; she held it together with a white flag and approached the windows where the Israeli soldiers were standing outside. They pointed their laser guided guns to her head, ushered her to go away.

Three hours later, all three of the injured were pronounced dead. The Israeli soldiers who refused to allow them treatment succeeded where their colleagues had earlier failed when they targeted these three men with bullets.....

Masked Israeli soldiers and commandos took me from international waters.

The British government did not lift a finger to help me, till this day I have not seen or heard from a British official.

The Israeli government stole my passport.

The Israeli government stole my lap top, two cameras, 3 phones, $1500 and all my possessions.

My government, the British government has not even acknowledged my existence.

I was kidnapped by Israel. I was forsaken by my country."
Posted by Tony at 3:10 AM