The method in Israel's madness 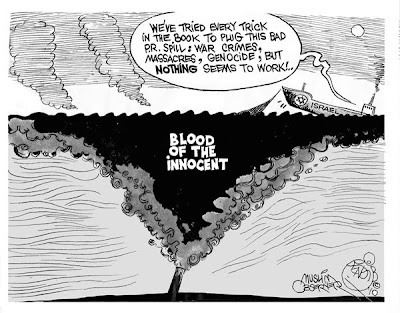 "Israel's heavy-handed attack on the Mavi Marmara carrying activists heading for Gaza was motivated by fear as the ultimate Israeli nightmare has come true. The new key axis in the Middle East is Turkey, Iran and Syria, and it has smashed the divide-and-rule logic Western colonialism has been imposing on the region for more than a century....

Israel's "mad dog" strategy - conceived by former military leader Moshe Dayan - is not exactly an exercise in fitting in. Even centrist Middle East analyst Anthony Cordesman, an establishment icon at the Center for Strategic and International Studies, wrote an essay under the title "Israel as a Strategic Liability?"

Big Brother Washington may be - forever - blind to it; but if you are a state and your strategy is to configure yourself as South Africa at the twilight of apartheid - by the way, at the time Israel was trying to sell nuclear weapons to South Africa - method is the last thing to be found in your madness."
Posted by Tony at 9:11 AM