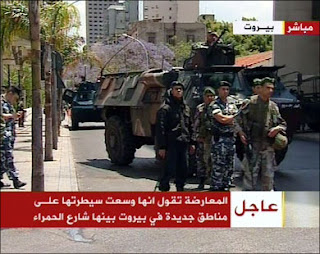 "The Lebanese army has taken control of the pro-government Future TV station and al-Mostaqbal newspaper as radio al-Sharq has gone off air.

Amid ongoing clashes in Beirut, some 800 gunmen affiliated to Hariri's al-Mostaqbal (Future) Movement surrendered to the army last night. The opposition has reportedly taken full control of key neighborhoods of Beirut, including al-Hamra and al-Wardan but the situation in the Lebanese capital is now relatively calm, a Press TV correspondent reported.

The army, meanwhile, has surrounded the house of leader of Lebanese Druze community, Walid Jumblatt, to protect him.

Hariri had earlier said that the government could reverse a decision to outlaw a telecommunication network used by Hezbollah and it also could mull over the reinstallation of the sacked security chief of Beirut Airport.

He has proposed a national dialogue on the issue.

Hezbollah leader Seyyed Hassan Nasrallah said on Wednesday that the government's moves were a declaration of war against his movement. "
Posted by Tony at 7:17 AM