Beating the Drums of a Broader Middle East War 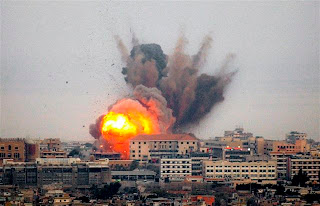 "The Levant could be the starting point of a major international conflict with global ramifications and which could quickly spin out of control. Such a conflict could even involve the use of Israeli or American nuclear weapons against Iran and Syria. Syria has additionally declared that it is preparing for an inevitable war with Israel despite the fact that it believes that the chances of a war in 2008 are slim.

In the scenario of a war against Iran, the reaction of Syria will be pivotal. Damascus plays a central role and how it acts and reacts will have a definitive impact on Israeli military strategy in regards to Iran. It is in this context that Israel, the U.S. and the E.U., with the help of Saudi Arabia, Jordan and Egypt, have been attempting to undermine and ultimately destroy the alliance between Syria and Iran. This is part of a geo-strategic stride to foreclose the possibility of a Mediterranean battle-front that might emerge in the Levant as a result of an attack on Iran.
The casus belli for an Israeli attack or a joint Israeli-U.S. attack, possibly involving NATO, against Syria or against both Syria and Iran could use the pretext of any form of retaliation by Hezbollah against Israel for the assassination in Damascus of one of its leaders, Imad Fayez Mughniyeh.

Hezbollah has joined Iranian officials in saying that the U.S. military is incapable of starting another war in the Middle East by launching attacks on Iran and Syria. [1] Israeli officials have also renewed calls for peace by openly mentioning that Tel Aviv is willing to return the Golan Heights back to the Syrians, while there have been strong political noises against the move in Israel. [2]

Tel Aviv is simultaneously part of a U.S. endeavour that claims Syria has a secret nuclear program aided by North Korea. [3] Strategic efforts, with strong links to war preparations, have also started with the aim of bringing temporary calm to the Palestinian Territories as part of the same track of events in the Levant......."
Posted by Tony at 5:02 AM