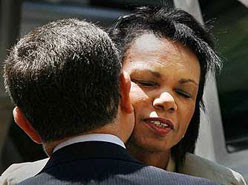 ".....Sheikh Hassan Nasrallah, secretary general of Hizbullah, who rarely makes public appearances, accused Mr Siniora of crossing "a red line". In a long and threatening speech he said that Hizbullah's secure communications system was its most powerful tool in the 2006 war against Israel. The guns started firing within hours of his words.

Predictably, Hizbullah's better-trained fighters won easily. By yesterday they had seized control of large areas of Beirut's Muslim sector, besieging in their residences the Druze leader Walid Jumblatt (whom they blame for the confrontation) and the Sunni leader Saad Hariri. Mr Hariri's television station was forced off the air, his newspaper offices were in flames, and Hizbullah gunmen roamed freely in neighbourhoods once controlled by the government. The Lebanese army stayed neutral throughout. Hizbullah's show of force left the government even weaker than it was at the start of the week. The government had bitten off more than it could chew in confronting Hizbullah over its fibre-optic cables. The government cannot now retreat, because if it did it would be finished, but nor can it impose its authority on the ground.

Behind a weaker Lebanese government lies a Bush administration which has alternated between periods of neglect and urging direct confrontation. Neither has worked. Nor has its isolation of Syria. George Bush arrives in the region for his final tour next week. His programme has more to do with paying homage to Israel on the 60th anniversary of its founding than it has with dousing the flames of conflict that the US and Israel keep on fanning. Lebanon is just one more of Mr Bush's failures in the Middle East."
Posted by Tony at 5:28 AM