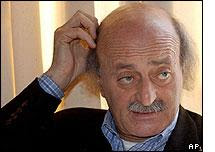 "09/05/2008 Walid Jumblatt's services to the Israeli enemy against the Resistance in Lebanon are innumerable.

Indeed, the Lebanese MP has always been the first to aim at sensitive points, giving Israel a golden opportunity to benefit from them.
Jumblatt's speeches have always constituted intelligence material for Israel to found many of its aggressive acts on both political and combat levels.

The Resistance communications' network case is a clear proof: Jumblatt put this issue in the crosshairs of Israel.
"..Communications linking Beirut to South Lebanon to Western Bekaa and the Jizzeen region as well as Baalbek and Hermel," Jumblatt said when raising the issue last week.
"The most dangerous thing is that the Lebanese telecommunication ministry discovered that Hezbollah had spread a communications network across Lebanon to secure Hezbollah from Israeli and US wiretapping," Israeli expert in Middle Eastern affairs, Oded Granot, said in the wake of Jumblatt's comments.

Another service Jumblatt extended to the Israelis on a golden plate was raising the issue of smuggling arms to the resistance via Syria and his demand to put Lebanese-Syrian borders under international control. So Israel took Jumblatt's stance as a pretext to intensify violations of Lebanon's sovereignty.
"Yesterday, some 20 trucks loaded with weapons entered into Lebanon. Why are weapons and ammunition sent to Lebanon through the Lebanese Syrian border?" Jumblatt asked during one of his interviews.
In the same context, Israeli analyst Ami Dror wondered whether Israel was ready in view of "Hezbollah's accumulation of weapons or it should urge the world to perceive that we won't accept this and request the United Nations deploys forces on the border with Syria to prevent army smuggling that allows Hezbollah to build its force."

Moreover, Jumblatt's extensive rhetoric about security squares and crossings between the Bekaa and the South constituted a document on which Israeli minister of transport Shaoul Moufaz relied and essentially used in the strategic dialogue between the US and Israel. "The South is one square. Baalbek-Hermel is another, and the same goes for Jizzeen and Mount Lebanon," Jumblatt stressed.

As for Jumblatt's focus on what he and his allies call "Hezbollah's destruction of Lebanon in the July 2006 war," it goes without saying that it was a faithful interpretation of an Israeli wish.
"I had said that Hezbollah has won this war, but what a huge price Lebanon has paid," Jumblatt said in the wake of Hezbollah's victory in 2006.
"We had hoped that Hezbollah be considered as a party that has destroyed Lebanon because this would weaken it," former Israeli national security adviser Giora Eiland said.

This conformity between Jumblatt and Israeli positions, in fact reflects collusion by both sides against the resistance, and this had practically materialized during the July War."