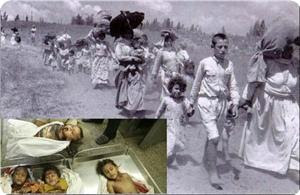 by Stephen Lendman
Global Research, May 5, 2008

Jews in Israel and around the world will commemorate May 14. It's the 60th anniversary of the State of Israel's founding. Thousands of other Jews everywhere along with everyone of conscience stand with the Canadian Palestine Support Network (CalPalNet). They cannot celebrate. They will not celebrate. They remember the Nakba. They know it continues. They condemn 41 years of occupation; the starving and bombing of Gaza; the oppressive Separation Wall; the theft of Palestinian land; the building of illegal settlements; the denial of the right of return; the killings, torture, imprisonment and harassment; the denial of basic human rights; and Israel's disdain for international law.

They "can (and) will continue (their) efforts to end these injustices, uphold international law," and support every UN resolution demanding it. "This is the only road map to peace." They, with millions of others, won't ever stop working for it."
Posted by Tony at 5:50 AM