We didn’t mean to kill them 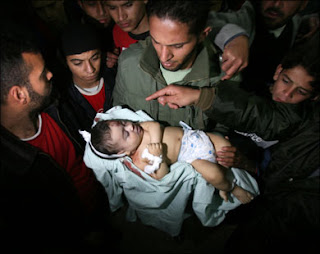 Israel says it doesn’t mean to kill Palestinian children, yet they keep on dying

We already have a special procedure for cases where a Palestinian child dies as a result of a misfired missile, a misaimed shell, an unfocused helicopter, or a distracted sniper. At first, we deny a child even died. Later we argue that his own people killed him. Later we issue explanations and excuses and scenarios that only become dumber with the passage of time.

Then comes the turn of the “investigating officer” (it will never be an investigating judge, a scrutinizing observer, or an inquisitive civilian. It’s always an officer) who proceeds to issue some nonsense that clears us of any wrongdoing. Ultimately, we declare that the evil Arabs are at fault, because they take cover among civilians........"
Posted by Tony at 4:40 AM