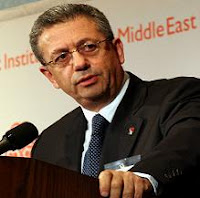 "Palestinian Legislator, secretary-general of the Palestinian National Initiative, Dr. Mustafa Barghouthi, said on Sunday that the visit of US secretary of state, Condoleezza Rice, to the region is only for media consumption.

Dr. Barghouthi stated that this visit and other visits will not lead to a real progress unless the United States practices real pressure on Israel to stop its violations especially the ongoing settlement construction and expansion in the occupied territories.

He added that “Israel welcomes Rice by announcing plans to construct more settlement homes in the West Bank”, and said that the United States, if it is a fair mediator and willing to achieve progress, should practice pressure on Israel to stop its ongoing settlement activities.

Dr. Barghouthi called on the Palestinian leadership to stop its negotiations with Israel as long as the Israel government continues its violations on the ground.

He said that these negotiations are giving Israel a chance to go ahead with its assaults against the Palestinian people, and its illegal settlement activities.

Dr. Barghouthi demanded the Palestinian leadership to take a clear stance and condition the resumption of peace talks with a full Israeli freeze on settlement construction and expansion, and a halt to all invasions and assaults."
Posted by Tony at 6:49 AM