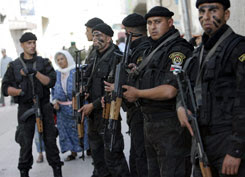 "A Palestinian civilian was killed on Tuesday when President Mahmoud Abbas's security forces clashed with gunmen for the first time since launching a law-and-order push in the northern West Bank.

Hundreds of Abbas's forces deployed to the city of Jenin on Saturday in a U.S.-backed security push Washington hopes will show the Palestinians can rein in militants - Israel's main condition for Palestinian statehood.

Residents in the town of Qabatya near Jenin said civilian Ahmed Fawwaz Kmeil, 20, was shot as he tried to escape a standoff between Abbas's forces and local gunmen who were sitting in a cafe.
Palestinian forces said in a statement the man was killed when an "outlawed group" opened fire on the security men, adding they would investigate the incident and keep up their crime-fighting push.

The Jenin deployment by Abbas's forces, some of whom receive U.S.-funded training in Jordan, was the second big Palestinian security campaign in a major West Bank city following a similar mission in Nablus late last year......."
Posted by Tony at 5:23 AM