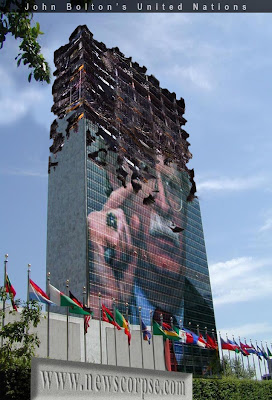 John Bolton, America’s ex-ambassador to the United Nations, has called for US air strikes on Iranian camps where insurgents are trained for war in Iraq.

"Mr Bolton said that striking Iran would represent a major step towards victory in Iraq. While he acknowledged that the risk of a hostile Iranian response harming American’s overseas interests existed, he said the damage inflicted by Tehran would be “far higher” if Washington took no action.

“This is a case where the use of military force against a training camp to show the Iranians we’re not going to tolerate this is really the most prudent thing to do,” he said. “Then the ball would be in Iran’s court to draw the appropriate lesson to stop harming our troops.”......."
The script of the lie, as usual, is handed over to the US by.....Israel:

".....A US spokesman last week confirmed DEBKAfile’s earlier disclosure that the IRGC’s al Qods Brigades had drafted Hizballah personnel to support Iraq’s Shiite militias and train them at facilities in Iran."
Posted by Tony at 4:58 AM