The Terror that begot Israel 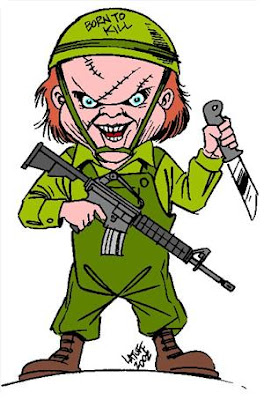 “There is no doubt that many sexual atrocities were committed by the attacking Jews. Many young (Arab) girls were raped and later slaughtered. Old women were also molested.”
General Richard Catling, British Army Assistant Inspector after interrogating several female survivors (The Palestinian Catastrophe, Michael Palumbo, 1987)

As the evil state of Israel is celebrating sixty years of ethnic cleansing and atrocities against the native Palestinians, many people around the world, especially young generations, will not be fully aware of the manner in which Israel came into existence. Similarly, the younger Zionist generations who don’t stop calling their Palestinian victims “terrorists” should have a clearer idea about Israel’s manifestly criminal past which Zionist school textbooks shamelessly glamorize and glorify

Prior to "Jewish" statehood, three main Jewish terror organizations operated in Palestine, primarily against Palestinian civilians and British mandate targets. The three were: The Haganah, the Zvei Leumi or Irgun and the Stern Gang. The Haganah (Defence) had a field army of up to 160,000 well-trained and well-armed men and a unit called the Palmach, with more than 6,000 terrorists. The Irgun included as many as 5,000 terrorists, while the Stern Gang included 200-300 dangerous terrorists.

The following are merely some examples of Zionist terrorism prior to the creation of the Zionist state in 1948: The list doesn't include the bigger massacres such as Dir Yasin, Dawaymeh, Tantura and others......."
Posted by Tony at 6:19 AM