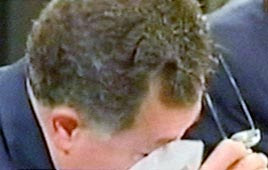 "08/05/2008 U.S. President Georges W. Bush and the head of Lebanon's US-backed unconstitutional government, Fouad Saniora will hold talks in the Egyptian resort of Sharm el-Sheikh on May 18 in the framework of Bush's visit to the region, Stephen Hadley, Bush's national security adviser has said.
The announcement came just after Saniora requested help on Wednesday from US Undersecretary of State for Near Eastern Affairs David Welch in light of the popular protest movement against his government policies.

In another show of support, US State Department Spokesman Sean McCormack renewed his administration's backing of Saniora's bloc and described the rightful demands of the Lebanese as mere 'disguise' for demonstrations.

"I know that these demonstrations have taken place under the guise of labor demonstrations, but I believe that Hezbollah has actually linked them back to some moves that the cabinet had made," McCormack claimed, saying that these kinds of actions serve only to hurt the interests of the Lebanese people.

"If you have access to the airport road cut off, that, of course, affects tourism, which is a real source of revenue for the Lebanese economy," he added. David Welch was, however, the first to damage the tourism season when he predicted hot summer in Lebanon.

ARMY REFUSES RULING BLOC PRESSURES TO DECLARE STATE OF EMERGENCY
Meanwhile, political sources revealed that the ruling bloc exerted pressure on Lebanese army commander General Michel Suleiman to declare a state of emergency. But the sources noted Suleiman has refused any attempt to push the army into street warfare.

According to the sources, Suleiman threatened to withdraw his troops from the streets to maintain the army's unity. The army commander refused to take the responsibility of decisions he didn't participate in taking, in a clear signal to the unconstitutional cabinet's decision with respect to airport security chief Brigadier General Wafiq Shqeir."
Posted by Tony at 4:53 AM