Hizbollah rules west Beirut in Iran's proxy war with US 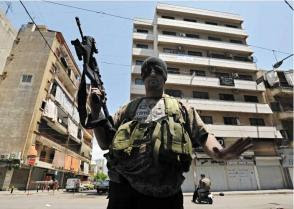 "Another American humiliation. The Shia gunmen who drove past my apartment in west Beirut yesterday afternoon were hooting their horns, making V-signs, leaning out of the windows of SUVs with their rifles in the air, proving to the Muslims of the capital that the elected government of Lebanon has lost.

And it has. The national army still patrols the streets, but solely to prevent sectarian killings or massacres. Far from dismantling the pro-Iranian Hizbollah's secret telecommunications system – and disarming the Hizbollah itself – the cabinet of Fouad Siniora sits in the old Turkish serail in Beirut, denouncing violence with the same authority as the Iraqi government in Baghdad's green zone......

.......The same applies to Saad Hariri, one of the most prominent government MPs and the son of the murdered former prime minister Rafik Hariri. He remains in his west Beirut palace in Koreitem, guarded by police and soldiers but unable to move without Hizbollah's approval. The symbolism is everything.

No, this is not a civil war. Nor is it a coup d'etat, though it meets some of the criteria. It is part of the war against America in the Middle East. The Hizbollah "must stop sowing trouble," the White House said rather meekly. Yes, like the Taliban. And al-Qa'ida. And the Iraqi insurgents. And Hamas. And who else?"
Posted by Tony at 5:46 AM