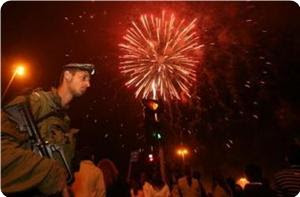 "Normal nations, like normal people, don’t celebrate their days of infamy. In fact, they struggle to forget them. Some countries with a troubled past try hard to deal with their shameful legacies, often by openly acknowledging their sins and apologizing to their victims and to their victims’ descendants.

However, in Israel, which encapsulates evil and racism, ethnic cleansing is celebrated with utmost pride as a consummate national achievement and a glorious success story. “This is our manifest destiny,” many Zionists would ostentatiously argue, with glee and deep satisfaction apparent in the tone of their voices.

Sixty years ago today, one of the greatest thefts in history took place in Palestine: when armed Zionist gangs launched a massive campaign of murder and terror against the native Palestinians.
The marauding vandals of Zionism murdered thousands of innocent people, destroyed thousands of homes, bulldozed hundreds of villages, and expelled the bulk of the Palestinian people from their ancestral motherland.

This campaign of genocidal ethnic cleansing, as Israeli historian and political analyst Ilan Pappe argued in his recent book “The Ethnic Cleansing of Palestine,” was not an unintended consequence or fortuitous occurrence, or even a “miracle,” as Israel’s first president, Chairman Weizmann, proclaimed; it was actually the result of long and meticulous planning......."
Posted by Tony at 6:42 AM