Occupation Under Another Name 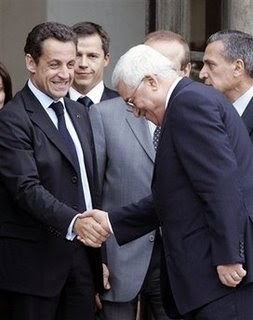 Paris proposes installment of an international force in Palestine

According to the JP, French Prime Minister, François Fillon, had informed the American-Jewish committee last Thursday that France and Europe can, whenever possible, participate in an international force to bolster the Palestinian Authority's security services.

Such a proposal comes ahead France's rotating presidency of the European Union, which had dispatched about 70 observers to the Rafah crossing terminal in southern Gaza Strip, following a U.S-brokered terminal operation in 2005.
The ruling Hamas party in Gaza had already sent out rejection to the notion , saying it would deal with such a force as an occupying power, once it is installed........"
Posted by Tony at 9:31 AM