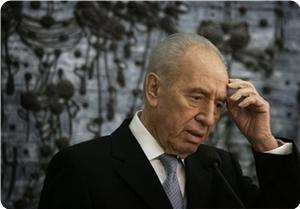 "Does Shimon Peres carry the genes of a pathological liar? The question may sound facetious to many, but Peres’s apparent inability to distinguish between truth and falsehood makes the question quite valid.

At 84, Peres continues to dish out a daily staple of lies, including obscene lies.

This week, the “hero” of the Qana-1 massacre, told foreign correspondents based in Israel that “Hamas was standing in the way of Palestinian statehood.”

Well, this is, of course, a blatant lie, to say the least, because every honest person under the sun, Jew or gentile, knows well that the main obstacle impeding the realization of peace in the Middle East has been the intensive colonization of Palestinian land and unending expansion of Jewish settlements on occupied territories that belong to another people........

During his stint as Prime Minister in 1996, following the assassination of Yitzhak Rabin, Peres oversaw the Qana-1 massacre in Southern Lebanon when the Israeli Wehrmacht knowingly and deliberately murdered more than a hundred Lebanese civilians, including numerous children who had sought refuge at the UN peace-keeping forces’ headquarters at the village of Qana.

For those who have forgotten or don’t know, neither Peres nor Israel has had the moral courage to say “sorry.”

Obviously they both lack the moral caliber to do so. And their crimes are too colossal and too numerous to be atoned for."
Posted by Tony at 4:43 AM