Why Isn't It the End of Hillary? 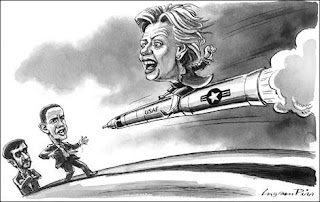 Because she's the War Party's favorite

"...... What is clear, by now, is that the War Party is openly rooting for Hillary: see the Weekly Standard for the neocons' paean to Hillary the war goddess. Before the Obama surge nearly wiped her out, she was sounding like Obama in his denunciations of the "war that should never have been fought," i.e., Iraq, yet she shifted gears rather abruptly and began presenting herself as a lunch-bucket know-nothing pro-war demagogue who could pass for Joe Lieberman in drag.........
Her "obliterate Iran" jeremiad gained her major traction in those quarters, and the clincher was her endorsement of Charles Krauthammer's demand that the U.S. extend its nuclear shield over Israel. Aside from that, however, and her generally more belligerent attitude toward Iran, is the general tone of her campaign: she's a "tough gal," belting down shots with the boys and showing up the effete intellectual Obama for the wimp that he is........
The War Party – both the Democratic and Republican wings – couldn't be happier. With the Wright smear campaign taking a big chunk out of Obama, and Clinton toeing the party line, they can't lose, unless Obama breaks through......"
Posted by Tony at 4:45 AM