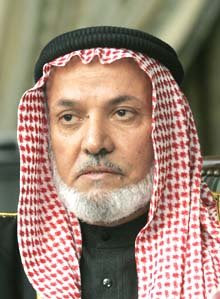 An Important Piece
From Missing Links

".....Had I been more alert, I could have referred him to this statement made yesterday by Harith al-Dhari, head of the Association of Muslim Scholars of Iraq (AMSI). Dhari is the leading public spokesman for the nationalist/Islamist wing of the Sunni resistance movement. Here's the concluding part of what he said, according to a summary on the AMSI website:

[Dhari] also stressed that what the occupation forces and the Iraqi forces are doing in this city [Sadr City] is what they do in other cities like Falluja, Samarra, Haditha, and Hit, and in parts of Mosul, Baghdad and other places: They use armed persons as pretexts for pitiless attacks on the people and the infliction of damage on them, with the aim of degrading them [idhlaal: degradation, debasement, humiliation] and causing them by force to cooperate with the notorious projects of the occupation and its collaborators.
That was one point: the use of degradation, debasement, humiliation in an attempt demoralize people and force compliance. It is a point that has been made many times before.

But the Dhari statement also contained an important message respecting the specific problem of Sunni-Shia solidarity. The statement is introduced this way:
The Association [AMSI] urged the people of Sadr City to learn from these events and to have patience, because the government and its leaders and its political blocs who have done this to them, and have called down upon them the forces of the occupation--these are the same people who earlier exploited many of the people of this city to help them execute their vile aims, under false slogans, whose basis is the defense of sectarianism.
As readers can see, Dhari is talking about the post-Feb 06 "ethnic cleansing" period. He is saying to the Sadrists of Sadr City: Hopefully now you will be able to better understand that those who were manipulated into participating in that, were being exploited by the same people who are now sponsoring these American air-strikes and other atrocities against you. Hopefully this will serve as an education for you, on the path to abandonment of sectarianism and an better understanding of the need to throw out the occupiers who are at the root of all of these problems, from which we have been suffering sequentially.

His remarks on this theme are summarized by the AMSI site as follows:
The Association criticized these atrocities as terror, and it blamed them entirely on the American occupation and the current government. It urges the people of this city--as it earlier urged the people of other cities who have undergone what they are now undergoing--to maintain their determination, and their solidarity and their patience, because that is what will break the enemy's arrogance, and force it to retreat and abandon all of its destructive projects.
It is true that the theme of the American occupation as the single root cause of all of the different manifestations of sectarianism from which Iraq has suffered, one after the other, since the invasion--that this theme has been stressed in all of Dhari's political/strategic statements, so its repetition here isn't new as far as that goes. What is new is his addressing this message to the Shiite population of Sadr City, in the light of the history of animosity dating from the post-Feb 06 period: In the final analysis, he is saying, this was not one group against another group. Rather this was just another case of instigation of sectarianism directly or indirectly by the American occupation. Now that the current stage of that cycle of instigated sectarianism is upon us, the conclusion should be inescapable: The same (Badr Corp and their American masters, although he doesn't put it that way) who were using Sadrists to attack Sunnis, are now bombing and attacking you. The simple answer is the return to Iraqi solidarity and the expulsion of the occupier."
Posted by Tony at 10:05 AM