UNRWA halts services in Gaza for lack of fuel 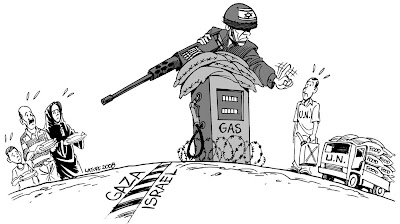 Cartoon by Carlos Latuff (click on cartoon to enlarge)

"GAZA, (PIC)-- The UNRWA has declared that it would halt distribution of supplies to Palestinian refugees in the Gaza Strip as of Monday in the event no fuel was provided through the Israeli-controlled crossings.

Adnan Abu Hasana, the UNRWA spokesman, said in a press statement that the lack of fuel would cripple the Agency's vehicles and would leave a "negative impact on our educational, relief and social programs".

He pointed out that Palestinian refugees constitute the poorest sector in the Palestinian community, and recalled that more than 650,000 refugees were receiving food and other assistance from UNRWA on regular basis and depend on them.

The UN agency had stopped its operations in the Gaza Strip last month when the Israeli occupation authority halted fuel supplies to the Strip but later resumed services when a limited shipment of fuel was allowed in.

The Gaza Strip is heading to a real human disaster due to the suffocating Israeli siege that tightened 11 months ago through closure of all crossings leading in and out of the Strip and blocking entry of basic materials that only trickled into the Strip over the past months."
Posted by Tony at 6:05 AM