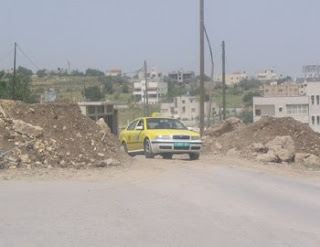 Dirt mound that was removed by Palestinian villagers

"The Israeli Information Center for Human Rights in the Occupied Territories, B'Tselem, has issued a report finding that the Israeli government has continued to maintain severe and comprehensive restrictions on movement in the West Bank, despite claims to the contrary.

According to B'Tselem, the Israeli government recently announced that at the end of March 2008, the army began removing 61 physical obstructions – dirt piles, boulders, and blocks – it had placed inside the West Bank. The obstructions were purportedly removed following Israel’s commitment, made in March to US Secretary of State Condoleezza Rice, to reduce restrictions on Palestinian movement in the West Bank. However, B'Tselem’s investigation and investigations by other human rights organizations indicate that the government’s declaration was no more than sleight of hand.

B'Tselem requested from the public-relations unit of the Ministry of Defense and from the Coordinator of Government Operations in the Territories a list of the physical obstructions that had allegedly been removed. To date, neither of the two governmental bodies has provided such a list. Relying on reports given to journalists, diplomats, and international organizations, B'Tselem independently compiled the list. When it investigated further, B'Tselem found that Israel’s claims were false......."
Posted by Tony at 9:52 AM