The End of the New Middle East 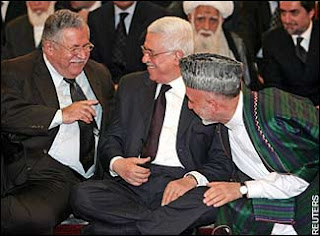 "......In Palestine, furious that Hamas won democratic and fair elections, the US (along with the Saudis, Jordanians, Israelis, Egyptians and others), backed the unpopular Fatah and Mahmud Abbas, a traitor to his own people, collaborating with their occupiers. As Fatah tortured its opponents Gaza was suffocated and the Palestinian people punished for their decision to take part in elections. As Fatah thugs attempted a coup in Gaza, Hamas thwarted this threat with a counter coup and easily defeated the American backed Palestinian militias......

.......The Americans thought that they could pick a proxy and get him to rule Lebanon. But Lebanon is too complicated for them, and they didn't know that no single group can rule Lebanon. The Americans along with their Saudi allies backed the creation of sectarian Sunni militias in Lebanon, some of whom were even trained in Jordan. Their ideology consisted of anti Shiite sectarianism. But these Sunni militiamen proved a complete failure, and America's proxies in Lebanon barely put up a fight, despite their strident anti Shiite rhetoric. Now it is clear that Beirut is firmly in the hands of Hizballah and nothing the Americans can do will dislodge or weaken this popular movement, just as they cannot weaken the Sadrists in Iraq or Hamas in Gaza. 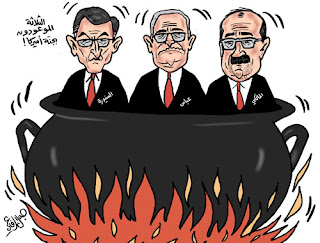 Say what you will about Hizballah and its allies, whether you sympathize with them or oppose them, it is clear that they cannot be dislodged, that they are an integral part of Lebanon and the Middle East. They proved this when they won the war of 2006 and proved this once again yesterday when they dispatched pro American and Saudi militias with ease and seized control of Beirut. If one dreams of a Hizballah without weapons, or a Hamas that does not engage in violent resistance, or any sort of peaceful resolution in the Middle East, then one has to begin at the beginning, with the Israeli occupation of Palestine (as well as a little bit of Syrian territory)."
Posted by Tony at 8:03 PM