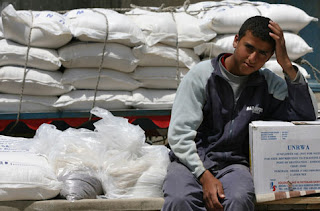 "JERUSALEM/GAZA, 6 May (IRIN) - Intense political divisions in the Gaza Strip have split people on most issues, except one: the situation has never been worse, nearly everyone agrees.

"I never remember Gaza being this bad," said one man in his early 40s. "Living here has become a game of survival." With fuel supplies nearly dry, many people no longer have cooking gas in their homes, leading some to search for alternative methods to make a meal.

"People now are starting to look through the garbage to find combustibles," a Gazan who works for a large international aid organization told IRIN.

"Even my colleagues have begun to search the garbage bins or the sides of the roads to find wood and plastics to burn so they can cook their food at night," he said, requesting anonymity so as to not embarrass his friends.

To add to the woes of the needy, UNRWA, the UN agency for Palestine refugees, has said it has been forced to stop food distribution today and is cutting back on other services it normally supplies, owing to the lack of fuel supplies. This is the second time in two weeks it has done this......"
Posted by Tony at 6:34 AM