There is hope in Gaza 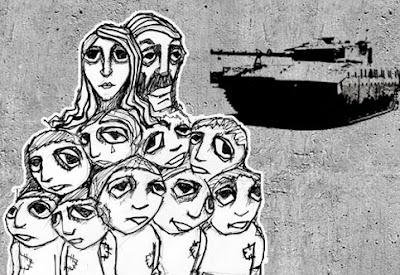 A Great Piece
By Miko Peled, The Electronic Intifada, 5 May 2008
(Miko Peled is an Israeli peace activist and writer living in the US. He is co founder of the Elbanna Peled Foundation in memory of Smadar Elhanan and Abir Aramin. Peled is the son of the late Israeli General Matti Peled)

"Israel's assault on the people of Gaza is so horrendous that it will not soon be forgotten. This vicious attempt by Israel to destroy an entire nation has tipped the scales for good and Zionism will forever be remembered as a blemish in the history of the Jewish people. The people of Gaza, however, give us hope and they will forever be remembered for their courage and resilience during these trying times.

The people of Gaza, while being deprived of rights and resources, still find the inner strength and the belief in their destiny to send their children to school. There are close to 800,000 children living in Gaza; they make up more than half of the population. The mothers and fathers and teachers of Gaza are creating hope where others see none, and they are building a future where some would claim there is none. But the price of education in Gaza is dear as the number of children targeted by Israeli violence rises continuously.......

Livni is no different than the young officer who murdered Gazan fishermen. She and other members of the Israeli cabinet along with the military top brass see no problem with Israeli forces killing Palestinian children, and they seek and often receive the support of the world community. In their minds, Palestinians do not deserve the same rights as Israeli Jews, and therefore it is permissible to torture them and murder their children. What is not permissible is to criticize Israel for the killing innocent Palestinians. Livni and her comrades are disturbed that the rest of us do not see this as clearly as they do.

But rather than give attention to the lies and accusations of Zionist militants, we would do well to focus our attention to the people of Gaza and in particular to the children who are forced to live in this concentration camp. These children and their brave and caring parents represent hope in its truest form. They need courageous people who, like Ramzy Baroud's late father, are willing to defy the brutal Zionist regime but who unlike him are free of the restraints of that regime. People who live in Israel and the US need to stand by the people of Gaza and help them to tear down the walls of this ghetto."
Posted by Tony at 7:30 PM