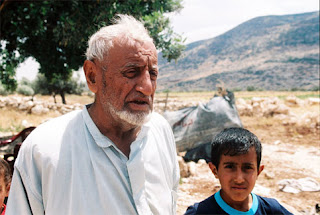 "AQABA, WEST BANK, 4 May (IRIN) - At the entrance to the small village, laborers continued to work on a cement divider, creating two lanes to make the road safer, while in a side room next to the village kindergarten, Haj Sami Sadiq, the head of the local council, carried on sorting out agricultural development projects for his residents.

Sadiq pretends it is "business as usual," but he knows that at any moment Israeli troops can arrive and begin demolishing most of the village's structures and even some of the streets.

Israel's high court last month rejected petitions by Aqaba residents asking that it cancel the military's demolition orders, which include the kindergarten, the mosque, a health care centre and residential homes.

"The first demolition orders were issued in 1997. In 2003, 13 more were issued, and since then every year they have given us more ... In the whole village there are 45 structures and 35 have orders against them," he said.

The village, in the northeast section of the occupied Palestinian territory, at the top of the Jordan Valley, has had a troubled existence since Israel occupied the West Bank in 1967......."
Posted by Tony at 6:34 AM