Sixty years ago in Battir (Part 2) 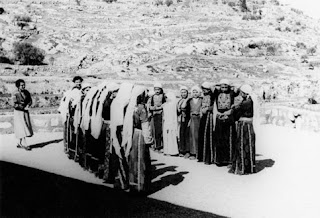 "For a long time any discussion of the "Arab-Israeli conflict" has skipped one basic fact: Israel, whether one loves or hates it, was created at the expense of the Palestinians. An entire people and hundreds of communities that had lived for centuries in tranquility had to be ruthlessly and unjustly shattered to make room for the Zionist state. The story of my village, Battir, southwest of Jerusalem, is only one of hundreds.

When I was growing up, hardly anyone in the village was aware, or needed to be aware, that our village traced its roots back to the second century. Generation after generation tilled the land, lived off its gifts and engaged in small trade. They adapted to the often harsh environment, brought up their children, interacted with their neighbors from villages near and far and lived their lives relatively happily and peacefully.

Although Palestine had a large Christian population, the 1,200 people in our village were all Muslim -- though there was one German wife who was very popular and known for her kindness, and I believe she was Jewish, by the name of Lina Shaffer -- and lived in effect like a large extended family........

But we are thankful that Battir, unlike hundreds of other Palestinian villages, did survive the Nakba -- the catastrophe. That was only a respite. In 1967, it fell under Israeli occupation along with the rest of the West Bank and the Gaza Strip. Forty-one years later, Battir is drowning in a sea of Israeli settlements and lies virtually cut off from what is left of its Palestinian environment by Israel's relentless construction of settler roads and apartheid walls.

I was there last in the summer of 1966 spending my usual summer leave with my family. The 1967 occupation shut me out until I managed a brief visit in 1997, 36 years later. There was little that I could recognize and I have not been back again."
Posted by Tony at 3:42 AM