Because The Pharaoh Has No Balls.....He Keeps The Concentration Camp Tightly Closed. Sorry, No Hard Feelings, Just Obeying Israeli Orders 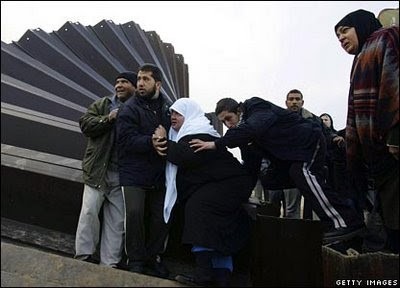 "CAIRO, May 6 (IPS) - With next-door Gaza Strip in a humanitarian crisis, the government is desperate to avoid a repeat of January's Palestinian influx into the Sinai Peninsula. In recent weeks, the security presence along Egypt's 14-kilometre border with the hapless territory has been significantly reinforced.

"The authorities are still in the process of boosting the police presence and enhancing security along the border," Hatem al-Buluk, independent journalist and resident of al-Arish, located some 40 kilometres west of the border, told IPS.......

Along with the siege, the people of Gaza have also borne the brunt of almost constant Israeli aggression. In March, more than 120 were killed -- many of them civilians -- during a six-day Israeli military incursion employing tanks and helicopter gun-ships.

"Their situation is agonising," said al-Buluk. "In addition to facing brutal Israeli violence on a regular basis, they have almost entirely run out of fuel and most basic food commodities."........

"The situation (in Gaza) is no longer bearable," Hamas leader Khalil al-Haya told reporters. He went on to warn that in light of Gaza's desperate circumstances, an "unprecedented explosion" was "imminent".

Cairo, interpreting the comment as a veiled threat to the integrity of its border, reacted angrily.......

Nevertheless, the government is taking no chances. According to press reports, and confirmed by people in the area, the police presence along the border has been significantly strengthened in recent weeks.

"There has been a gradual reinforcement of Egyptian border security since early April," said al-Buluk. He went on to note that, over the course of the last month, the number of central security officers stationed in the area has been raised from 750 to 2,750.

Al-Buluk also noted that the government was in the process of building an imposing barricade between Egypt and the Gaza Strip "as fast as possible."......."
Posted by Tony at 5:01 AM