Basra Battles: Barely Half the Story 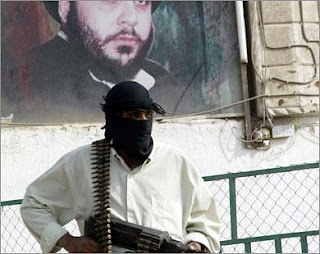 "......Al-Hakim is pushing for what is being termed a super Shia province with its centre in Basra; Sadr is demanding a unified Iraq with a strong central government. Al-Hakim wishes to see a permanent American presence in the country; Sadr insists on a short timetable for withdrawal. The US's major quandary is that Sadr reflects the views of most Iraqis. His possible victory in the south in fair elections could position him as the new nationalist leader, and a unifying force for Iraqis.......

Naturally, skewed reporting leads to slanted conclusions. No, the lesson learnt is not that the Iraqi army requires more training and funds, which would necessitate the US and other forces to prolong their stay in the country. It is rather that the tide has turned so fast in Iraq, whereby the new enemy is now largely Shia, and one which envisions a unified and free Iraq which controls its own resources; that Iran's influence in Iraq has morphed to the point of guaranteeing a win-win situation, while the US is playing with a lot fewer cards; that US firepower has proven less effective than ever, and that the upcoming elections could create a nightmare scenario whose consequences could remove the sectarian label from Iraqi violence and replace it with a nationalist one.

Reporters can be quisling, incompetent and parrots of official accounts. Regardless, no matter how they wish to term it, the battle of Basra is likely to change the nature of the US fight in Iraq for years to come. "