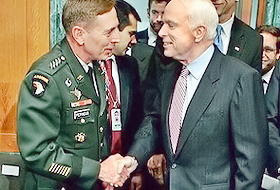 First it was the 'dead enders,' then it was al-Qaeda in Iraq, now it's the 'Special Groups' – but when will it end?

"Aside from the expected drivel and boilerplate rhetoric, the testimony of Gen. David Petraeus and Ambassador Ryan Crocker before Congress on Tuesday had a few surprises. Yes, we all know the administration's line: the "surge" is working, all's well, oh sure, more needs to be done but… etc., etc., ad nauseam. What I sense, however, is a shift away from the alleged "threat" posed by al-Qaeda in Iraq – which doesn't seem to be much of a factor anymore, according to the testimony of these two principals – and toward identifying the "real" enemy, the actual target of this administration's latest war plans: Iran.
This came out early on in the general's testimony, as he laid the blame for the recent violence in Basra at Tehran's feet:
"The recent flare-up in Basra, southern Iraq, and Baghdad underscored the importance of the ceasefire declared by Moqtada al-Sadr last fall as another factor in the overall reduction in violence. Recently, of course, some militia elements became active again. Though a Sadr stand-down order resolved the situation to a degree, the flare-up also highlighted the destructive role Iran has played in funding, training, arming, and directing the so-called Special Groups and generated renewed concern about Iran in the minds of many Iraqi leaders. Unchecked, the Special Groups pose the greatest long-term threat to the viability of a democratic Iraq."......."
Posted by Tony at 6:23 AM