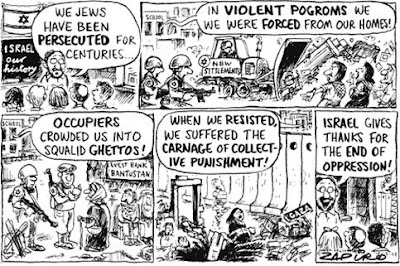 The 12 March cartoon by South African cartoonist Zaprio that was later attacked by David Saks of the South African Jewish Board of Deputies and which sparked debate in the country.

"As a 10-year-old growing up in Johannesburg, I celebrated Israel's birth, 60 years ago. I unquestionably accepted the dramatic accounts of so-called self-defensive actions against Arab violence, to secure the Jewish state. The type of indoctrination South African cartoonist Zapiro so bitingly exposes in his work, raising the hackles of scribes such as David Saks of the South African Jewish Board of Deputies. When I became involved in our liberation struggle, I became aware of the similarities with the Palestinian cause in the dispossession of land and birthright by expansionist settler occupation. I came to see that the racial and colonial character of the two conflicts provided greater comparisons than with any other struggle. When Nelson Mandela stated that we know as South Africans "that our freedom is incomplete without the freedom of the Palestinians," [1] he was not simply talking to our Muslim community, who can be expected to directly empathize, but to all South Africans precisely because of our experience of racial and colonial subjugation, and because we well understand the value of international solidarity......."
Posted by Tony at 5:16 AM