This is The Time to Smash The Ghetto Wall at Rafah, Again 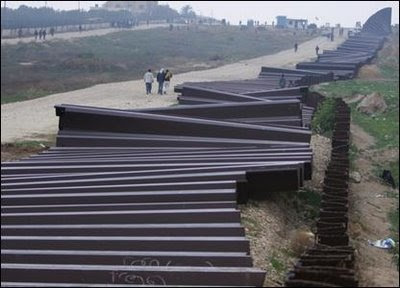 In retrospect, it is becoming obvious that Hamas made a mistake by agreeing to "negotiations" with the Pharaoh's regime about supposedly reopening the Rafah crossing between Gaza and Egypt. That regime, beholden to USrael, never intended to re-open that crossing. The instructions of the princess of darkness Rice were clear: let the Palestinians in Gaza starve in preparation for Israeli tanks to sweep the Strip to finish off Hamas and to reinstall her toy, Mahmoud Abbas.

The Pharaoh was buying time to build a more durable concrete ghetto wall and to get USraeli permission to increase the number of Egyptian troops to seal the ghetto from the Egyptian side. The Pharaoh's regime was also concerned about reaction of the Egyptian street in sympathy with the Palestinian jail breakers. The regime is hugely unpopular inside of Egypt and the last thing it needed was a mass Palestinian uprising busting out of the Gaza ghetto.

The Pharaoh's trick worked and Hamas was suckered in. Hamas even worked with the Pharaoh's goons to re-close the Rafah crossing and to prevent the Palestinians from attempting to cross to Egypt. After more than two months of meaningless "negotiations" with the regime about ending the siege and reopening the crossing, the Hamas team has returned from Cairo empty handed. After many false promises of imminent re-opening and other "positive" spin, Hamas is now forced to admit that the "negotiations" were a farce and a trick. The situation inside Gaza now is even worse than it was in late January when the wall fell. More people are dying due to lack of medicine, fuel and food and the supplies have dwindled to virtually nothing.

With the Egyptian uprising against the Pharaoh of the past couple of days spreading, this is the time to correct the mistake made earlier by Hamas. This time hundreds of thousands of Palestinians should storm the ghetto wall and this time keep the border open. There will be gun fire from the Egyptian side and some Palestinian legs will get broken as the Pharaoh's foreign minister Abu Alghait threatened. However, the Palestinians are dying a slow agonizing death as is. More than 125 patients alone have died since they could not get needed medical treatment.

The Palestinians lost their fear a long time ago and now the Egyptians are losing their fear of their brutal regime. It is important to escalate the confrontation with it and to keep it going. News of the strike of workers in Egypt's largest factory is very encouraging. Reporters speak of running battles between the demonstrators and the Egyptian "security" goons. The protesters are using guerrilla tactics by moving from one street to another and are taking the initiative.

The Pharaoh's regime is very worried and it should be. It could be living its last days and these are usually the bloodiest. As I wrote at the time of the Palestinian smashing of the ghetto wall in late January, this reminds me of the last days of the Shah of Iran.

As the Egyptians say: KEFAYAH!
Posted by Tony at 6:39 AM