The Pharaoh Ehud Mubarak is Doing His Best to Starve the Palestinians: Egypt bars commercial trucks from Rafah 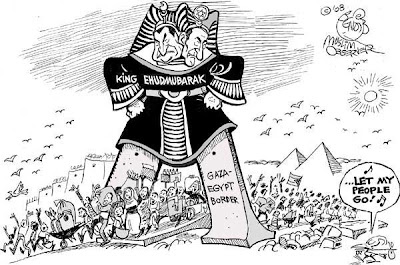 "Egypt barred large trucks from taking goods into the Sinai border town of Rafah on Thursday to remove any economic incentive for Palestinians to breach the Gaza-Egypt frontier, security sources said.

Egypt sent 1,200 security forces to Sinai from Cairo on Wednesday to reinforce the border following remarks by a leader of the Islamist movement Hamas that the border, which militants blasted open in January, could soon be breached again.

Police turned back goods-laden large trucks at checkpoints on main roads leading to Rafah and the nearby town of el-Arish, but smaller trucks and those not carrying loads were still being allowed through, the sources said.

They said the focus was on vehicles carrying food products, fuel and motorcycles - items that Palestinians bought in large quantities during the last border breach.

January's breach defied an Israeli blockade on Gaza. It allowed hundreds of thousands of Gazans to stream across the frontier at Rafah to stock up on food and fuel for 10 days before the border was re-sealed........"
Posted by Tony at 5:20 AM