Remembering What NOT Many of We the People Ever Knew about 'Never Forget,' Deir Yassin, 9/11 and Israel Too 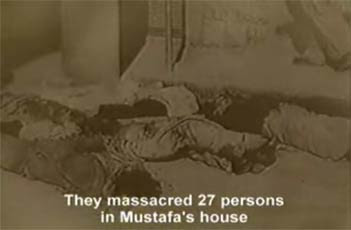 "Deir Yassin was once a peaceful Palestinian village on the west side of Jerusalem. On April 9, 1948 the lives of over 100 innocent men, women, and children ended by the hand of Jewish terrorists from the Irgun and the Stern Gang.

Deir Yassin is 1,400 meters to the north of Yad Vashem, the most famous Holocaust memorial, where the world is taught to "Never Forget."

Might the world also remember that on May 15, 1948, the British left Palestine and the Israeli military force consisted of three independent groups: "The larger one was the Hagana. Within the Hagana there was a strike force known as the Palmah. Outside Hagana there were two more independent smaller forces. The bigger of the two was Etzel, which was the underground terrorist organization of the opposition party led by Menahem Begin, and the smaller one was Lehi, known also as the Stern Gang, a splinter group which separated from the Etzel a few years previously." [1].....

Thinking people comprehend that all governments lie, that politicians get addicted to gaining and keeping power and that religion has been misused for eons.

Shortly after my first of five trips to occupied Palestine, in 2005, a USA Episcopal priest and I exchanged a few emails before he left America to work with Yad Vashem, the Jerusalem Holocaust memorial, where the world is taught to "Never Forget."

I wrote to the priest about my concern that the fastest growing cult in the U.S.A. is the cult of Christian Zionism and that approximately 25 million U.S. Christians choose the simple answers of fundamentalism rather than struggle with a God of justice, mercy and compassion......

I admonished that priest to consider how American Christians blind allegiance to every act of Israel as being orchestrated by God and therefore is to be condoned, supported, and even praised, should instead compel all people of integrity and good will to instead question and challenge the true motives of Christians who actually relish the idea of Armageddon-and who love to speculate on who gets left behind on Judgment Day.

After three email exchanges, I never heard from that priest again, but a parishioner of his from his Central Florida church wrote me that he had moved to Jerusalem and was now working at Yad Vashem.

Jesus' other name is The Prince of Peace, and he was very clear that on the final day, there will be a lot of wailing and gnashing of teeth by those who were so sure they were in, because they get left out.

If only the self-righteous and militant minded amongst us could remember what they have never even known and seek to do what Jesus promised; be peacemakers, for the peacemakers shall be called the children of God."
Posted by Tony at 5:51 AM